In order to help prevent vandalism, and to promote a greater sense of ownership by editors, AnOtherWiki has chosen to prevent editing by users who are not registered and logged in. To register your account, click here

Difference between revisions of "Naiaokami"

From AnOtherWiki, the free encyclopedia written by, for, and about the Otherkin community. 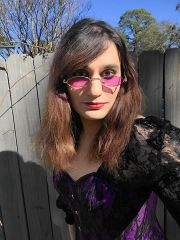 On all levels except physical, I am a wolf!

I'm Naia Ōkami! I am most well known for the quote “On all levels except physical, I am a wolf”. Despite this being my “claim to fame”, I would much rather be known for something ANYTHING else. In reality, I am a twenty-six year old transgender woman living in the Southeastern United States. I identify as a British Columbia Wolf and Red Fox therianthrope.

Despite mainly being known for my presence in the alterhuman community, I am also an early advocate of the neurodiversity movement, and am one of the main people responsible founding Autistic Pride Day (celebrated each year on my birthday, June 18th in 2005). Additionally, I speak about Autism Spectrum Disorders at conferences and universities across Georgia. More still, I advocate for LGBTQ+ rights in my home state of Georgia, and released the first guide to changing your gender marker in my state without reversible surgery in 2019. On yet another note of activism, I have also participated in operations against internet predators of children.

I am a hobbyist programmer; I’m also a credited game programmer & technical consultant for the Massively Multiplayer Online Social Game of Furcadia. I am the creator and administrator of both Kinmunity (otherkin community), and Wolf Howl (distributed social networking instance) and am a network operator for the ChatAutism IRC Network. My interest and specialization is in information security.

Outside of my hobbies, notoriety, and spirituality, I have worked in the fields of Information Technology and Investigations, loving the latter and despising the former. That’s me in a nutshell outside of what I’m most commonly known for — thanks for reading!