In order to help prevent vandalism, and to promote a greater sense of ownership by editors, AnOtherWiki has chosen to prevent editing by users who are not registered and logged in. To register your account, click here

From AnOtherWiki, the free encyclopedia written by, for, and about the Otherkin community. 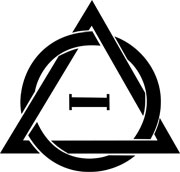 The Theta-Delta is used by many as the symbol for therianthropy.

Therians are individuals who identify as an animal that is known to exist (or to have existed) on Earth. Sometimes, more 'feral' creatures that are not known to exist are included as well, such as dragons, griffons, and sea serpents. The exact definition of therianthropy varies significantly, a condition increased by the fact that the explanation for therianthropy varies wildly depending on who is being talked to (common explanations include reincarnation, conditioning, atypical neurology, and atypical psychology).

The term, therians, is derived from therianthropy, which is the over all name for the therian experience. Therianthropy comes the Greek words therion, meaning "wild animal" or "beast", and anthropos, meaning "human being". The modern use for the term therianthropy first arose in 1994 on the Alt.Horror.Werewolves Usenet discussion group as a label for general animal-people, since some felt that lycanthropy was too specific.[1]

The history of therianthropy in its current form is a fairly short one, reaching back to around the Usenet era of the Internet. Nonetheless, tropes and ideas integral to therianthropy have been present since very early in human history, and animal-human hybrids can be found in many cultures, most notably the Ancient Egyptians.

The deities of Egypt are widely famed for being depicted as part human and part animal, and in the modern era they have been absorbed into neopagan practices, science fiction[2], anthropomorphic art[3], and the beliefs of some therianthropes and otherkin. In addition to the more famous deities (Sekhmet, Bast, Anubis, and Thoth), a host of other Egyptian deities had associated animals. Isis, for example, was associated with the kite, and Hekt had the head of a frog.

Animals themselves were held to be of import. They were not worshipped, as is often thought to be the case, but were instead regarded as associated with the deity in question. An Egyptian would no more worship a cat or crocodile than a Chrisitan would worship a cross, or a Jew a Torah, but they were treated with high degrees of respect because of their association with the deity. Animals associated with deities, including cats, fish, crocodiles, and ibises, were mummified and buried in tombs as a sign of this respect.

It should be noted that, due to the highly variable nature of Egyptian religion, the above cannot be said to be universally true with certainty.

Other Areas in Africa

Lions and leopards figure heavily in African folklore, frequently as sentients that ravenously eat cattle and other livestock (or humans), possibly as a result of their frequently antagonistic relationship with native African peoples. Often these big cats are given human characteristics[4] or said to be able to transform into humans. This last is often done so that they may marry human women, who typically (with the assistance of a male relative) discover the deception and arrange for the lion shapeshifters to be driven away or killed.

During the early and mid 20th century, the Leopard Society, from Western Africa, was active in countries such as Liberia, killing individuals with metal claws, wearing the skin of leopards, and eating the flesh of those they killed in the belief that it would bring them strength[5]

While the true concentration of therians in Africa cannot be determined, for many intents and purposes there are few to none. Africa has a fairly low level of Internet penetration (though that's rapidly changing), and any therians in the area would generally have to rely on lower-tech methods of communication, if that, making the presence of a noticeable therian community in Africa unlikely outside of the urbanized areas.